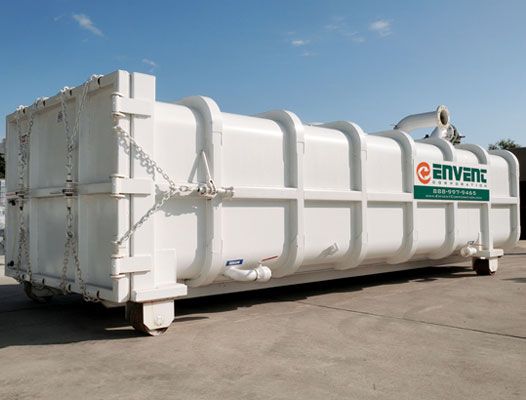 A large Oil and Gas customer needed to perform much-needed maintenance on one of their Crude Oil tanks in the North East. The processes of degassing and cleaning crude tanks are relatively common throughout the industry; however, this project inherited some issues that first needed to be addressed. To start off: the crude oil contained a high level of H2S ( 1500ppm), the sulfur and entrained mercaptan made it so that the odors of this tank would be immediately detectable to any residents in the area. The composition of the crude was also very light, meaning that the tank would liberate vapor very quickly, this vapor could easily enter the atmosphere and dispense among the surrounding area. The risk for exposure to H2S to the neighboring residents would also be extremely critical. The tank was located in a small terminal, where it was surrounded by a residential subdivision to the south, a retirement community to the north, and a large community center to the east. The concern for public opinion in a region where Oil and Gas companies are not seen favorably was also important, this was made clear to them when their last maintenance event at the site was met with public complaints, and local camera crews in regards to the odors during the event. To worsen the situation: the local environmental department had limited the vapor control devices allowed to only one option: Carbon Adsorption.

Envent Corporation worked with our customer’s Engineers, and Compliance Specialists in order to develop a plan that not only met the needs of the site to be “Good neighbors” but also addressed their safety concerns while expediting the project to minimize the downtime for the tank. Envent developed a liquid/carbon scrubber system that was capable of adsorbing all of the VOCs that saturated the vapor space in the tank. The system was capable of a high volume flow of ~4,000 SCFM. This flow kept the tank seals and roof openings from reliving any vapors onto the atmosphere. Multiple monitoring devices were placed around the tank to ensure that no vapors were escaping around the tank or any processes. Liquid phase chemical media was used to safeguard the activated carbon, while a multi-port manifold was used to divert and manage flow to specific scrubber trains. A nitrogen suppression system was also engineered for the safety of the crew and integrity of the system. Lastly, Envent also prepared multiple support structures for media and chemical change-outs to ensure the system was designed so that no downtime would be had during the project.

Envent’s solution kept the vapor space in the tank safe from the initial vapor space opening until the tank was deemed gas free and safe for entry. The system adsorbed well over 12,000 lbs of VOCs while maintaining a 100% DRE throughout the multiple scrubber trains. While the tank was estimated to reach a gas-free state in about 3 days, degassing was completed in just 26 hrs. This rapid completion of the degas allowed the customer to move-up scheduled work, saving them extra costs from the multiple contractors who were on standby. The project received no complaints from the neighbors, and no attention from the local media, which in this case; is very good news.